DPS Chairman Serhiy Verlanov reported the following at a briefing with the Prime Minister of Ukraine on February 27, 2020: “Last year, due to the monitoring system, tax invoices for about UAH 10 billion (0.56% of the total) were stopped. After consideration, invoices only for UAH 3.4 billion had been registered. Therefore more than UAH 6 billion from the Ukrainian budget were about to be stolen. We have prevented this. "

In an interview with RBC, Serhiy Verlanov said that "thanks to the 117th regulation on monitoring of tax risks and its improved version - the Cabinet of Ministers of Ukraine # 1165 - provided additional budget revenues of over UAH 2 billion a month. In fact, we achieved this result. not only by combating the so-called conversion centers, but also by other cases of VAT fraud - "scrolls", swapping groups of goods, atypical exports, etc. ".

According to the specialists of the Unified Legal Support Service (hereinafter the Service), the current regulatory mechanisms to counteract the formation of an illegal value-added tax credit are ineffective due to the violation of the requirements of the Tax Code of Ukraine by the leadership of the State Tax Service of Ukraine and the inactivity of the Ministry of Finance of Ukraine.

Thus, the absence of statutory grounds for suspending the registration of a tax invoice/adjustment calculation (hereinafter – the TI/AC) in the Unified Register of Tax Invoices (hereinafter – the URTI) during 2018-2020 caused the renewal of registration of tax invoices in court, including by enterprises which according to the bodies of pre-trial investigation have obvious signs of fraud and carry out the formation of illegal tax credit with VAT.

The Kyiv District Administrative Court satisfied thee lawstuit claim and found the actions of the State Fiscal Service of Ukraine (hereinafter – the SFS) unlawful precisely because of the absence of statutory grounds for suspending the registration of the TI/AC, which was stopped only on the basis of letters of the SFS, which determined the relevant Criteria. The court ordered to register 114 tax invoices and to collect from the State Tax Service a court fee of 218 994 UAH. The Court of Appeal upheld the decision of the trial court. At the same time, when lodging an appeal with the State Tax Administration in Kyiv, 328 491 UAH were paid. budgetary funds.

The Kyiv District Administrative Court satisfied the lawsuit claims and found the actions of the State Fiscal Service of Ukraine unlawful precisely because of the absence of statutory grounds for suspending TI/AC registration, which had been stopped only on the basis of the SFS letters defining the relevant Criteria. The court ordered to register 7 tax invoices and to collect from the SFS a court fee of 22334 UAH. In the absence of funds, the appellant's appeal filed a motion for deferral in connection with the unsatisfactory state of the SFS. The Court of Appeal dismissed the motion and the appeal was returned.

At the same time, investigators of the SFS found that Maximus Light LLC, together with other enterprises of the transit and conversion group, were created with the purpose of providing tax minimization services to be paid to the budget, facilitated deliberate tax evasion business entities.

Examples of businesses involved in the so-called "scroll"

Investigators of the State Fiscal Service in the Lviv region have found that Mobizhuk LLC sells mobile phones, accessories, computer and other equipment. The sale of goods is carried out through its own network of retail stores located throughout Ukraine (about 650 stores) and several cities in Poland, however, it is documented as a sale to businesses with signs of "doubt". In particular, Ronis Group LLC, Fortunis LLC, Tide Limited LLC, Grant Stream LLC, for which there is a “substitution of goods”, as there is no further sale of products purchased from Mobizhuk LLC, and there is a sale construction works, auto parts and other construction materials. The total amount of transactions for the period August 2018 January 2019 with Mobizhuk LLC is over UAH 20 million.

In its case, in case 857/13319/19, the Lviv Regional Administrative Court ordered the State Fiscal Service to register the tax bills of Mobizhuk LLC in the amount of over UAH 13 million, due to the groundlessness of application of the Taxpayer's Risk Criteria to suspend the registration of TI/AC. The decision was upheld by the courts of appeal and cassation.

Thus, when working out the relationship of "Tedis Ukraine" LLC with counterparties-buyers for the further sale of tobacco products, the possible risky transactions were identified, which further traces the supply chain break. Tedis Ukraine LLC is included in the list of risky ones, with further suspension of registration of tax invoices. The Odessa district administrative court in several cases on the claim of «Tedis Ukraine» LLC canceled the decision on refusal to register the tax invoices on the grounds that the risk criteria were determined solely on the basis of a letter from the SFS.

In its turn, the State Bureau of Investigation, during the pre-trial investigation, found that the commission of the Large Taxpayers Office made a decision to recognize TEDIS Ukraine LLC as a taxpayer with signs of risk. Notwithstanding the aforementioned decision of the commission, the enterprise registered 9,195 tax invoices for the amount of VAT 129 706,4 thousand UAH with respect to 389 risky counterparty purchasers, causing damage to the state's interests by the specified amount.

In the previous materials of the Service it was stated that Resolution 117 of 21.02.2018 was adopted in accordance with paragraph 201.16 of the Tax Code. At the time of adoption of the resolution by the Ministry of Justice, the Ministry of Economic Development and Trade, the State Regulatory Service was advised to the Ministry of Finance that the draft resolution does not contain statutory grounds for suspending the registration of tax invoices, and therefore there are risks of declaring the SFS actions illegal.

The Ministry of Finance of Ukraine, by letter dated May 24, 2018 № 26010-06-10 / 14202 and letter dated April 16, 2018, informed the Service that the State Fiscal Service of Ukraine was tasked with developing a draft order approving the criteria of taxpayer riskiness, the riskiness of transactions, indicators according to which a positive tax history of the taxpayer is determined for its further state registration in the Ministry of Justice, but the said draft order has not been provided. (The letters were signed by the Director of Database Monitoring and Payment Verification, Dmitry Serebryansky).

The sole Service has repeatedly stated in writing to the Ministry of Finance of Ukraine that it is necessary to comply with the requirements of the Tax Code of Ukraine of the provisions of Regulation No. 117, in particular: by letter of the Service No. 1012/2018 of the MFU dated 10.12.2018.

The response was received from the Ministry of Finance of Ukraine without proper response, signed by Deputy Minister Serhiy Verlanov.

Also, the letter of the Service № 0104/2019 of the MFU dated April 1, 2019 - received a response from the Ministry of Finance of Ukraine without proper response, signed by Deputy Minister Serhiy Verlanov.

The management of the SFS and the Ministry of Finance were also informed of the groundlessness of the application of the Criteria defined only by letters of the SFS, which did not give rise to the rules of law, following the Supreme Court's position in the decision of April 02, 2019 in Case No. 822/1878/18, which stated that the letters of bodies of executive power are not normative legal acts within the meaning of Article 117 of the Constitution of Ukraine, and therefore are not a source of law under Article 7 of the Code of Administrative Judiciary of Ukraine.

Only, in fact, following the results of the trial in case 826/12108/18, the SFS leadership prepared a draft resolution of the CMU, which normatively approved the relevant Criteria. The following resolution was adopted on 11.12.2019 and registered under number 1165 (materials concerning its illegality).

According to experts, the leadership of the SFS, contrary to the interests of the service did not ensure timely alignment of regulatory documents with the requirements of the Tax Code, and the management of the Ministry of Finance did not provide proper control of compliance with the legislation by the SFS, which causedfailure of violations in 2018-2020 and renewal of registration of tax invoices by court, including by enterprises which according to the bodies of pre-trial investigation have obvious signs of falsity and form an illegal VAT tax credit.

Also, according to experts, the resolution adopted by CMU 1165 does not comply with the provisions of the Tax Code, contains significant legal uncertainties and contradictions with other regulations, which in the future will also lead to the recognition of the actions of the State Tax Service of Ukraine body unlawful and renewal of registration of TI/AC in court, businesses that create an illegal VAT tax credit.

In particular, discrepancies actually force the employees of the State Tax Service of Ukraine at the regional level to exceed their powers and to make deliberately false information in official documents, which carries legal risks of bringing them to justice.

If you need legal advice on the issues covered in this material, please call our hotline numbers or send your inquiry to: This email address is being protected from spambots. You need JavaScript enabled to view it.

Output data of the Information Agency:

Information about the founder (co-founders): via the link

Full name of the person responsible for the issue: D.Yu. Osmolovskyi 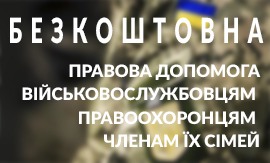